For several years, I have admired the Queen Susan Shawl as an epic knitting project of stunning beauty and intricacy. 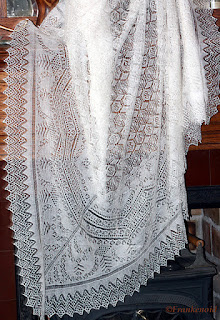 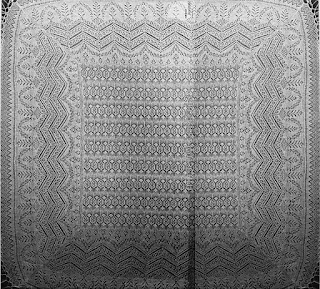 I did not, until recently, really consider it something that I might try knitting myself. In looking at the pattern, it does not appear to be all that complicated at any given stage, though it is quite large in size. All told, there are over 500,000 stitches in the finished product, knit upon size 0 needles. The shawl is knit in three parts: a center knit back and forth, a border picked up and knit around the center, and an edging which is knit on perpendicularly to the border.

At the 2016 Maryland Sheep and Wool Festival, I found a yarn that I thought would be suitable for the project and purchased 7000 meters of it. It's Leicester Longwool cobweb weight yarn from Wool Out Of Wales. 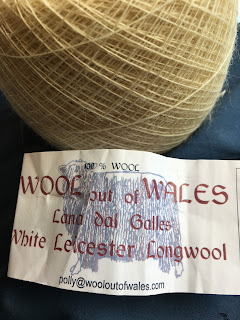 In May, I started a swatch. I didn't knit the whole swatch pattern, but stopped after the first repeat to wash and block it. I was initially concerned that the halo/bloom of the yarn would obscure the pattern too much. After blocking, I think the pattern shows up quite nicely. I did, however, learn that sharp needles are definitely needed to keep from splitting the stitches. 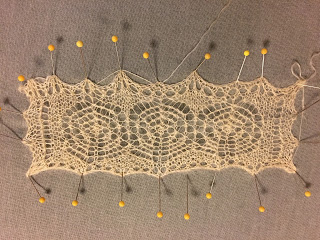 After casting on the shawl center in early June, I knit a couple rows and then put it down. Knowing that I’ll be knitting 510 rows and over 138,000 stitches in the center of this thing is a bit intimidating. However, in knitting several rows yesterday, I reminded myself that the pattern itself is not particularly difficult. It just requires some attention to detail.

I then decided that this project will help me break my binge knitting habit and thought about what would be a good minimum daily progress goal. It seems reasonable that I would be able to knit 2-4 rows a day. (The catch is that I won’t take this on business trips due to concerns that it might get lost or damaged and I’ve also learned that knitting with lace weight yarn in the sketchy lighting of airplanes is not productive.) It’s discouraging that it’ll take over a year to just knit the center. Based on the number of stitches, I anticipate it’ll take over a year to knit the border. The edging might go a bit faster.

Throughout the project, I'll have to keep reminding myself that slow steady progress will still get me done faster than working periodically on it with weeks to months of neglect in between. Slow, steady, consistent work (rather than starting big and quitting over and over again) is the key to success in a lot of things. As Dory says, “Just keep swimming!” 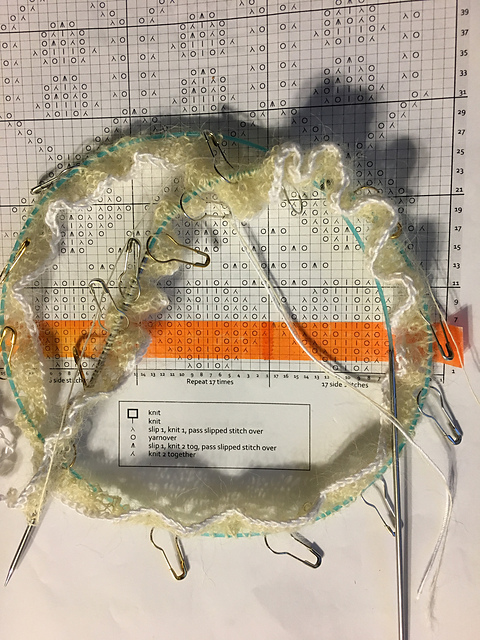